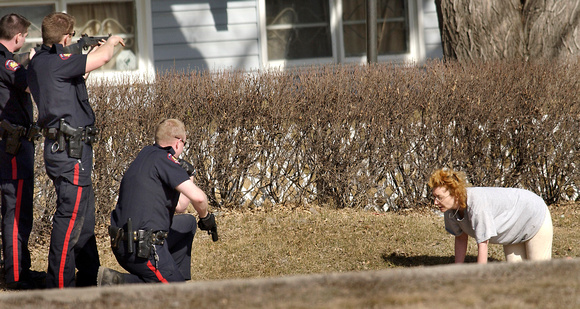 Calgary Police evacuate a woman from a residence in N.E. Calgary as they try to apprehend a suspect in the same house at the 5200 block of Memorial Drive N.E. Police did arrest one man after a landlord / tennant dispute erupted at the residence where the landlord alleged that a man held a gun to his head. Three residents in another suite of the house (including this woman pictured at right on her knees) were quickly evacuated from the home, and the suspect was later arrested without incident. Portions of the strip mall across the street (at the 52 Street Plaza) were also evacuated during the incident.
KEVIN UDAHL, Calgary Sun
© Kevin Udahl Photography
Powered by ZENFOLIO User Agreement
Cancel
Continue